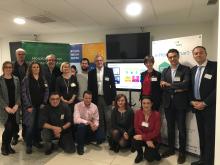 Dementia effects have significant impact not only on the elderly’s life, but also on her/his family and caregivers,  with negative repercussions from both the psycho-physical and the socio-economic perspective.  Dementia is such an emergency that it has been the focus of the Call 2016 – Living well with dementia - within the AAL European Programme recently renamed Active and Assisted Living.

Within the Call 2016, the ISTC-CNR research group led by Amedeo Cesta has recently achieved an important result winning the European competition with the project proposal called TV-AssistDem.

Read more info on the CNR News, visit (soon) the project Web site, or follow us on Twitter.